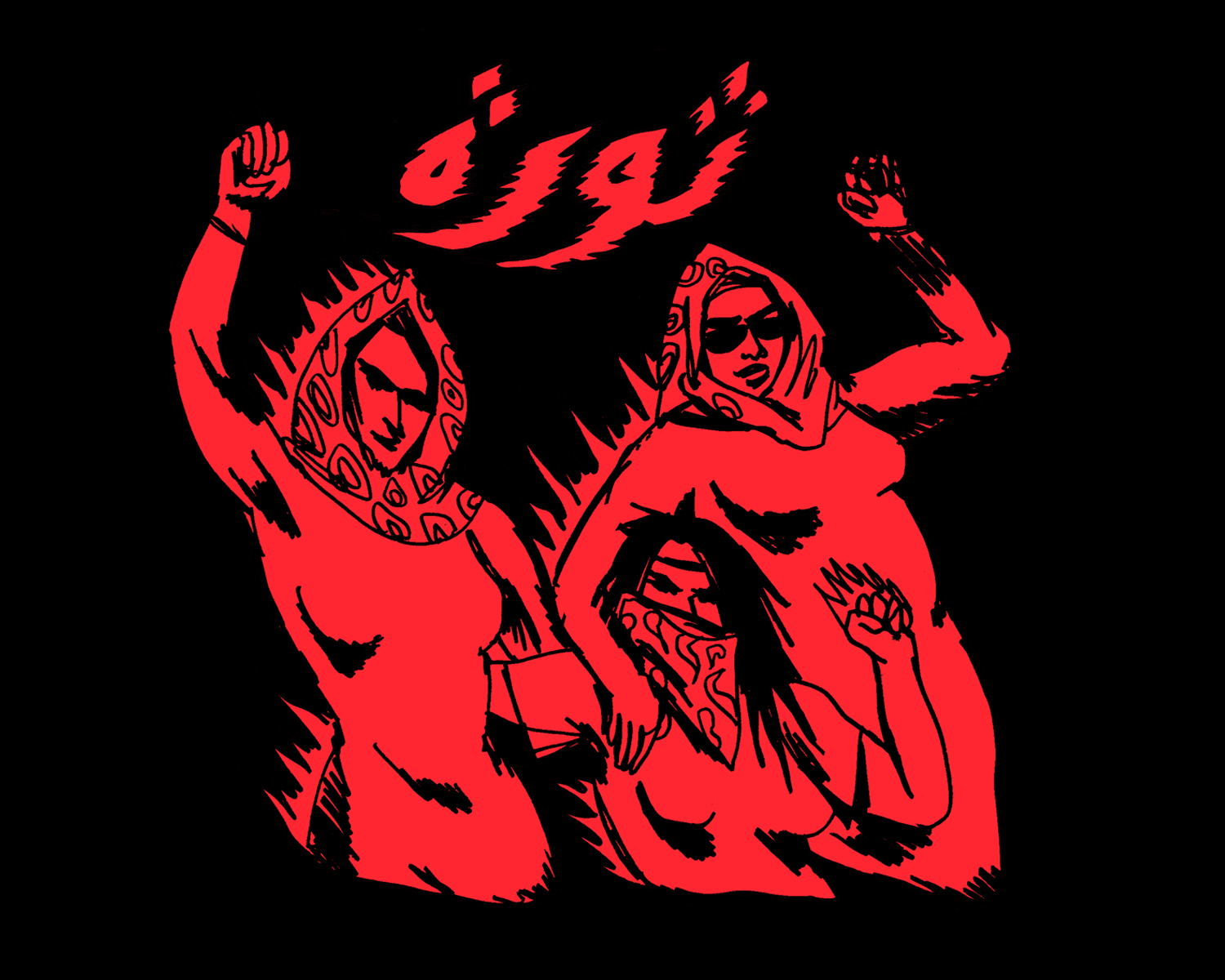 Alex’s professor advised him to steer clear. He sends a screenshot of her saying there might be violence. I say okay but she’s Christian and projecting because you’re white. She’s also motherly, he says.

Riad Al Solh is ceremonial. Speakers blare music. There’s dancing and food vendors. People walk around like at an amusement park. I compare it to what haunts my mother.

I wake to defensive texts from a curator in Beirut. He’d heard I told someone that he had servants (I’d called them slaves). We argue, turns out he doesn’t. This time I was projecting given all the Christians who do. Some even brought them to the protest.

Hundreds of thousands stormed the streets in just the first few days of recent protests in Lebanon, a revolution of unprecedented magnitude in a country mostly stirred by sectarian motives. Shared hatred for the ruling class and rage against its longstanding abuse of the least fortunate catalyzed a revolt with demands that have gone far beyond revoking taxes: the people want radical change. We have grown most aware of the extent we’ve been exploited and no politicians are being spared from our outrage.

Amidst chants of “All of ‘em means all of ‘em,” corrupt politicians – particularly the billionaires and war criminals among them – were publicly cursed and ridiculed. There was no hesitation in doing so until one specific chant emerged: “Nasrallah is one of them.”

Never holding any government position yet wielding considerable political power, Hezbollah’s Secretary General being implicated drastically shifted the discourse. His vilification extended to the very existence of Hezbollah and the legality of its armed forces sparked disruption within a previously unified front.

Secondary to its operation as anti-colonial resistance, Hezbollah’s stake in government means its representatives cannot be absolved of criticism. But the idea of abandoning the country’s only realistic defense against exhibited occupational threat is dangerous and turns the focus away from the uprising’s initial goal of economic justice. Not to mention, large numbers of protesters and citizens still hold faith in the Resistance. Shia Muslims make up the majority of the population and the working class to whom this revolution matters most.

Looking at how some parties are attempting to hijack the protests to protect themselves and advance their political agendas, it’s convenient for those already biased against Hezbollah (some of whom are also prejudiced toward Shia Muslims) to buy into their narrative from behind a façade of total reconstitution. In the process, they adopt western imperial propaganda that alienates Hezbollah from Lebanese society and the rest of the political make-up. This becomes a classed attack on identity, disregarding that even though Hezbollah members identify as such or as Shia, they remain citizens of the same country and equally entitled to self-determination. And branding their resistance as a terrorist organization is a blow to Hezbollah’s efforts against foreign invasion, dividing the protests on that basis and reigniting sectarian sensitivities.

It isn’t ideal for resistance to be exclusively associated with a single religious group, but the rigid sectarian conditions under which it was conceived greatly determined the nature of its identity. Now Hezbollah finds itself stuck in that system with no secular alternative to dissolve into. For this reason, it is crucial that the discourse on Lebanon’s Resistance be reconstructed away from sectarian designations and toward distinguishing persecution from scrutiny of Hezbollah as a political party.

More specifically, Hezbollah’s opposition should prioritize the revolution’s unity and steadfastness by deferring the debate on its military until a secular government is formed as opposed to leaving the country defenseless while it moves through erratic transitions. Hezbollah supporters, on the other hand, should be reminded that “The Party of God” is not holy, and its politicians aren’t untouchable. They are to be held accountable like the rest, not only for corruption but also instances of overlooking it.

This system, which has long subjected the Resistance to sectarian prejudices and continues to invalidate it, will not be brought down easily without the active engagement of Hezbollah’s support base. Their decreased participation following ostracization has made protests suffer a drop in number, diminishing their potential in the process. It is true that there is doubt regarding the direction things are headed, and many of us are troubled with skepticism. But being dismissive and disengaged will only let our worries harden. It’s not too late to dream of a powerful, unified Lebanon that fights corruption within and outside its borders.

Our Revolution is Feminist

The uprising in Lebanon has escalated from a few burnt tire roadblocks to nationwide protests demanding an end to the sectarian regime. What was first a response to proposed tax hikes has expanded into a revolution. At any given moment there is common frustration fuelling collective thought and action, and sharing one’s opinion has never been more powerful. If you’re not sure how to interpret a politician’s remark, you’ll surely find an analysis soon enough that will help make sense of it. Or if a politician gives a condescending speech, a protest is already being organised in response. Discussions around politics, economics and law happening under makeshift tents or in city gardens are short moments of reflection amidst the fiery energy of the protests. The other day on the road to Riad el Solh protesters used the the abandoned Grand Theatre scaffolding as a huge demonstration tool, clanging their anger into an overwhelming cacophony, what I would best describe as emotional catharsis.

Supporters of the Lebanese president call him bay el kol or “father of all.” Other party leaders, called zu’ama or “chiefs,” are comparable to feudal lords. They embody the patriarchal figure within their respective sects, clinging to power by positioning themselves as guardians of a post-war truce and manipulating the fear of civil strife to their own political ends. This entrenched system maintains its popularity through bonds of loyalty, even love, to party leaders, while in actuality it ensnares dependent followers through nepotism and clientelism. The uprising rejects this kind of leadership, targeting it with one of the most persistent slogans, kellon ya3ne kellon or “everyone means everyone.” In other words, the absolute rejection of an essentially patriarchal system entangled with the male chief figure, religion and abusive alienation of women and other marginalised groups. The parties, comprised of ex war militias turned oligarchies, claim they should remain in power to preserve the identity of the confessions they adhere to. They antagonize other sects to exploit public opinion and evade the fact that their agendas are void of any substantive socioeconomic vision. Their only aim is to maintain a power-sharing model initiated by the French mandate in the 1920s that is meant to allocate representation by way of quota across prominent sects. The system serves the interests of a corrupt ruling class and perpetuates itself through political inheritance, securing votes in exchange for cash, favours or jobs in government and private institutions.

Sectarian ties to foreign influence complicate internal politics in relation to geopolitical interests. Throughout the revolt, the establishment has attempted to undermine the popular movement with various strategies, from accusing it of foreign funding to blaming protesters for dragging the country into civil strife and economic collapse. But it is this very system that is responsible for the deterioration of the economy and the propagation of sectarian hate and fear, which is why protesters are demanding constitutional change to exclude the sectarian quota. This is part of our fight for liberation from the logic of (sectarian) identity that has yielded a political stalemate for over a century. For this reason, we insist on calling it a revolution, rejecting the label ‘movement’ sometimes used by the media and ruling class. The latter, mind you, often owns the former. Another major demand is to reorganize the economy by ending the central bank’s neoliberal policies that impose a rentier economic model over a productive one that could tackle income inequality and unemployment. The lethal outcome of neoliberalism is well revealed in Lebanon and the popular uprising is not merely local when viewed as part of the global wave of anti-neoliberal revolt happening in Chile, Iran, Iraq, or France.

Lebanese revolutionaries remain resolutely horizontal, refusing any leadership or representation. This has played in favour of an uprising now entering its 45th day. The achievements are many: the prime minister and cabinet resigned, the Beirut Bar Association presidency was won by an independent candidate and supporter of the uprising, and most importantly, there has been a collective reconsideration of what participation in the democratic process could mean. I’d like to think the fear we were taught to have of the others, the very basis of the sectarian state, is slowly losing grip. Public spaces are being reclaimed as the desire and necessity to engage eclipses fear and incites women and the LGBTQ+ community to take on pivotal roles. They have been bravely holding megaphones, organising and moderating debates, leading marches, and standing up to police brutality. During a few confrontations with armed forces, women stood as human shields to protect the crowd. Our chants deal with sectarianism, nepotism, corruption and capitalism. When a woman takes hold of the mic they take on an additional dimension, and our revolution starts dealing with racism, patriarchy, machismo culture and homophobia.

Feminist groups are the ones loudly demanding rights for the disenfranchised: for the abolition of the kafala system subjugating migrant workers, the amendment of the nationality law to ensure that Lebanese women can pass citizenship onto their children, and an end to the systemic abuse of refugees and the LGBTQ+ community. The horizontal support network, the collective efforts of its operation, the opening of spaces for discussion and planning, are what make the revolution feminist. This transient reality, fueled simultaneously by euphoria and despair, is a test-bed where the emancipatory power of feminist ideas is put to practice. People are trying to build a future that did not seem possible before, a constant balancing act between persistence and uncertainty. Emotions can swivel by the hour, from waves of hope to painful descents in the face of the powers that be, whether fearmongering attacks by sectarian thugs, the dire economic situation or the brutal indifference of the establishment. We are again reminded of our agency in large groups when reclaiming public spaces or simply blocking roads to halt economic activity. The uniting goal of the revolt spurs a spirit of collectivity surpassing minor differences. We are formulating new language that breaks from the torpor of the past thirty years following the Civil War, and closer to longed for political imaginaries.