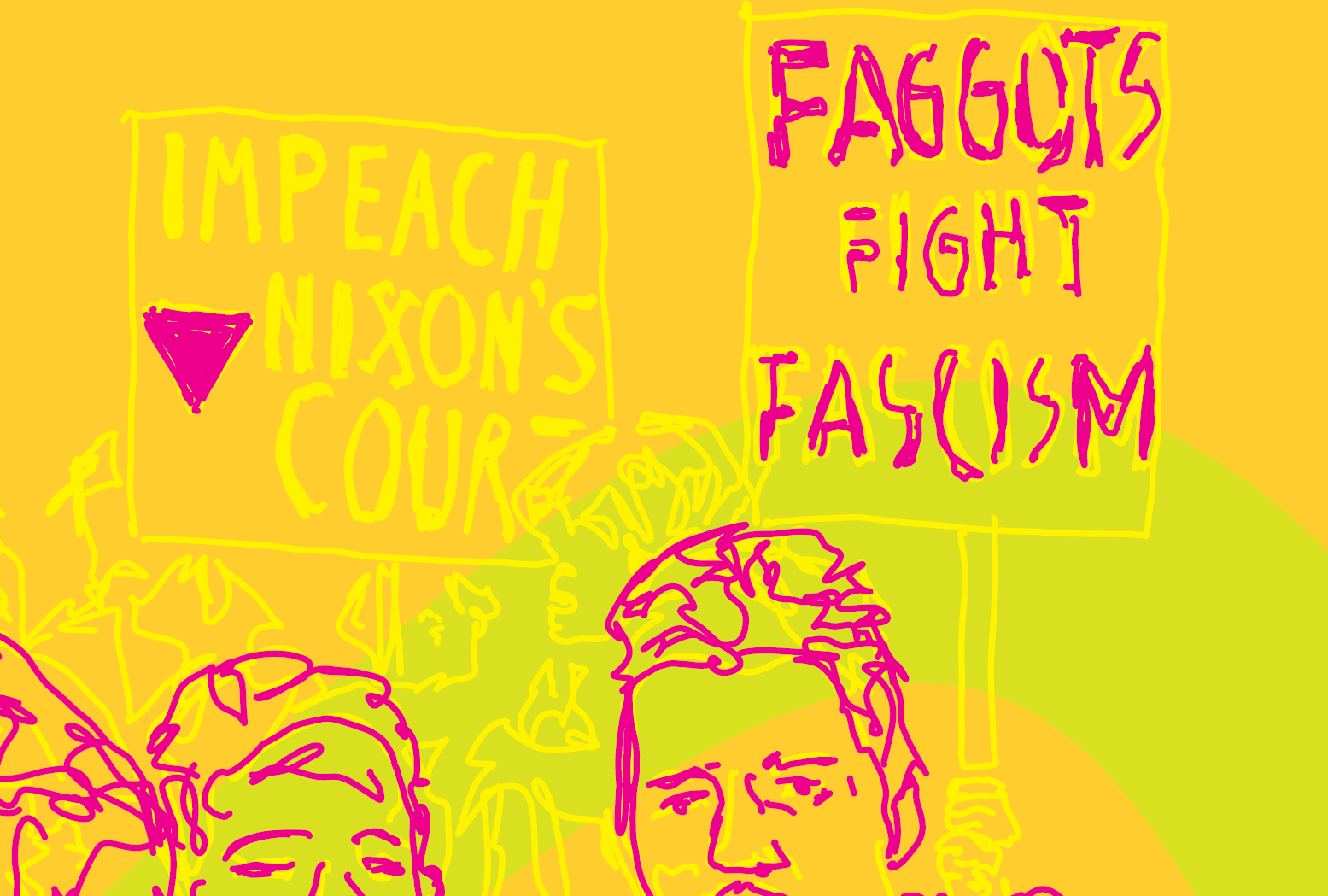 From September 4 to September 6, 1976, 140 self-identified faggots, 135 of them white, gathered at Wolf Creek, an intentional community of back-to-the-land gay men in rural Oregon. What they meant by “faggot” is important to define: in their historical context, terms like ‘gay’ and ‘lesbian,’ and the more explicitly political ‘faggot,’ were less stable and rigid descriptions of sexuality and especially gender than are currently assumed. Some of the activists at Wolf Creek, for example, considered themselves to be “sissies” who existed in dyadic opposition to “straight” or “male” faggots; some of these sissies, like the “street queens” who led the rebellions at Compton’s Cafeteria and at the Stonewall Inn, can be viewed through the lens of trans history and experience as well. The faggots at Wolf Creek, aiming to “clarify the relationship between gay men’s oppression and class struggle,” led a series of workshops exploring class, imperialism, the development of patriarchy, and labor organizing from a variety of different clearly-stated political positions: the majority, and the organizers, were Marxist-Leninists; the rest came from a variety of different flavors of Maoist and Trotskyist sect. These left analyses were blended with a heavy dose of the primitivist, highly sexual, and self-consciously outré affect of gay liberation. The attendees held a moonlight ritual and an orgy in a mock tipi, forms of “playing Indian” that exemplify a trend in gay liberation I call primitivist homopoetics, a metropolitan gay identification with tropes of non-western and non-state peoples and cultures coded as “primitive” which arose from the development of colonial regimes of sexuality. This kind of identification could lead both to a liberationary politics of alliance and to racist appropriation. For an example of the latter, one need only consider the mock tipi that had been constructed by the nearly all-white commune, a tipi which hosted an orgy on the Saturday night of the conference that was praised as “valuable and liberating cultural labor.”

The following excerpt, from a presentation on socialist feminism by an activist identified only as “Jamie,” reveals the influence of socialist feminist conversations about social reproduction and the relationships between sex, class, embodiment, and revolutionary politics on the politics of gay liberation. Jamie’s presentation conceived of faggot organizing as intimately connected to—and revolutionary to the extent that it could activate—the contradictions of social reproductive labor foregrounded by contemporary socialist feminist activism and thought. Battling gays and straights alike who thought that what happened in the bedroom was private, Jamie sought to break down the “public/private split, the personal/political split…what we do in bed is work, it is socially useful work.” This vision of gay subjectivity – and even gay sex – as a form of socially productive labor has echoes in the work of the primitivist gay communist Harry Hay, whose ideas influenced the Wolf Creek faggots and the Radical Faerie movement of which some of them would go on to be a part. It also echoes, to some extent, Guy Hocquenghem's thoughts on the relationship between labor and homosexuality being simultaneously published in France.

This workshop transcription also considered quite concrete questions of labor organizing, differing from other mid-1970s extensions and adaptations of socialist feminist thinking by promoting a program of political action rooted in its analysis of the sexual division of labor identified by socialist feminists, and their understanding of how social reproductive labor provided a lever for the transformation of society. Jamie’s analysis anticipated the reorientation of the United States economy around the service sector, stressing the importance of organizing service workers and fighting for worker and community control. In his view, gay men, due to their disproportionate engagement in social service work and their embodiment of more flexible and cooperative masculinities, could and should engage in these kinds of labor struggles. In so doing, they should, he argued, follow the lead of what he called “third world” women.

Like so many of the radical dreams of the 1970s, this vision came true—but only partially, in ways full of twisted irony, and without achieving class agency or class power. HIV organizing emphasized mutual aid, through the creation of community networks of medical and social care against the nightmarish background of mass death and state inaction. But this service infrastructure to care for HIV patients developed against a broader political background of the commodification and privatization, rather than the decommodification and socialization, of social reproductive labor and care work. Jamie’s naive faith that gay affects and lifeworlds would necessarily transform broader systems of social reproduction proved untrue—we have plenty of openly gay nurses, for example, but the mere fact of their presence has not shattered and reformed an entire class’s understanding of the limits imposed by the sex-gender system on their collective agency. There is, however, reason to believe that the lessons of queer organizing can deeply inform labor struggles.